A while ago I experimented running various operating systems on the Nokia N900. Now with the availability of N900 hardware emulation in QEMU (see http://wiki.meego.com/ARM/Meego_on_Qemu ) I decided to try this the other way around. The result: Regular N900 Maemo software straight out of the phone boots in QEMU, but no GUI since there is no SGX graphics emulation in the Maemo QEMU yet.

(in soviet Russia, the computer boots YOU) 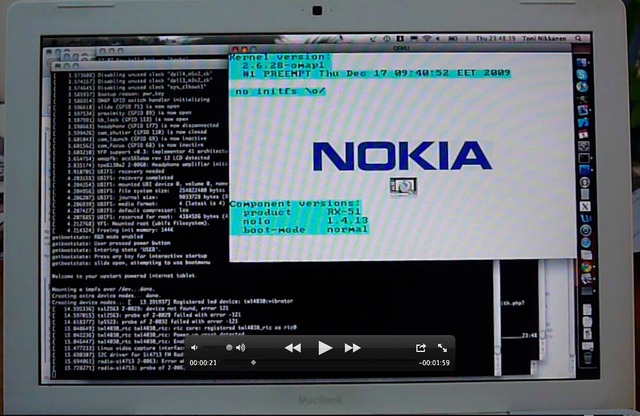 I tried this already last week when I spotted the omap3 branch of qemu-maemo on gitorious: http://meego.gitorious.org/qemu-maemo

Turned out that it was not unable to execute the regular N900 bootloader since it does not support the OMAP3 HS version (security features). I spent some time figuring out what to do, until today I found the MeeGo N900 QEMU image! Of course it had to have a bootloader that works with QEMU. I simply took the bootloader code from there and applied it on top of the image file I gathered already last week from my N900 device, so I’m running the stock Maemo N900 kernel, rootfs etc. and only the bootloader comes from MeeGo.

I will update here more exact instructions on how to do this yourself, if there is enough interest..