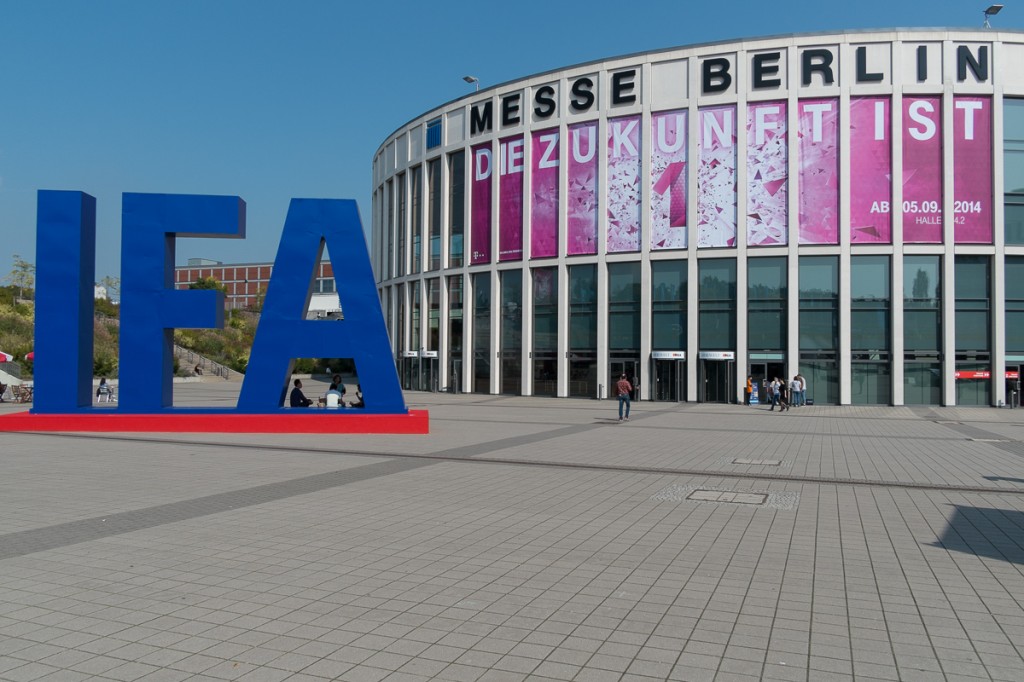 This Sunday I decided to skip enjoying the last warm sunny day of the summer, and go and see what’s cooking at the IFA 2014 Consumer Electronics fair in Berlin. This is not an exhaustive professional report in the way the big established blogs and magazines do, instead I am just going to mention a few things that I saw there and what I thought of them – in my own style. Some of the gadgets I saw were not brand new, having been on the market for a few weeks or months already, but I just happened to see them there for the first time. So, in random order, here we go:

Let’s say I’ve been sceptic of the first wave of smartwatches. My suspicion has been that they would be too large, too cumbersome, consume so much battery that they would be a bother to maintain, and ultimately useless… but, the Samsung Gear S was not THAT large, not THAT cumbersome, (battery life I couldn’t comment on without using it on a daily basis)… and it wasn’t THAT useless either.
The HERE-based Navigation feature seemed like a genuine thing. It was a bit slow in finding a route to the restaurant “The Bird” (my standard navigation test in Berlin) and typing the name of the venue was a bit hard on such a small screen… but it did work. For turn-by-turn walk navigation, that is. A tiny map display would sometimes work wonders in augmenting my sense of where I’m going though. Also I see a lot of potential in adding support for HERE Transit, too!
So, the tech is promising but I am going to wait for the second or third generation before considering purchasing anything… The thing has to become less bulky for starters. 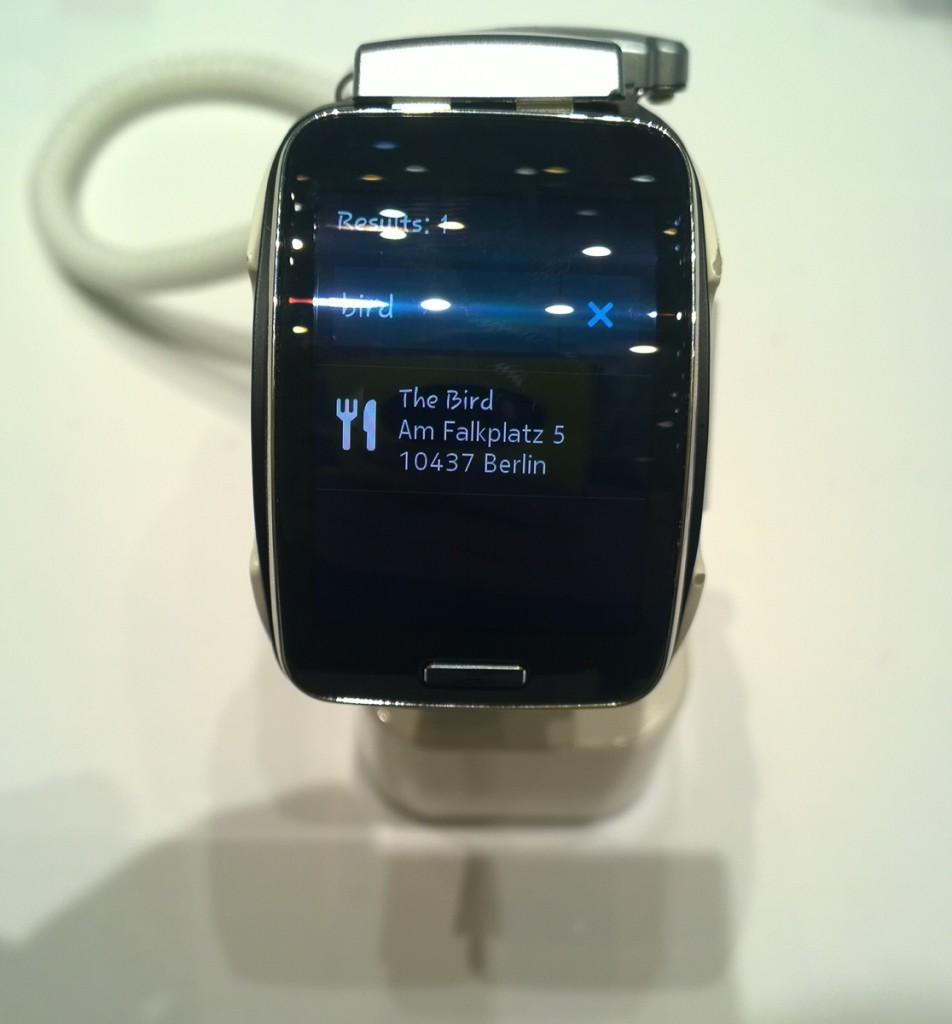 Having recently bought the Samsung Galaxy Tab Pro 10.1 for it’s impressive screen, performance and good size+weight, I was positively impressed by the flagship S model. The screen was even better than on the Pro, and remember I said I bought the Pro because of the awesome screen it had! The overall build quality and feel were also much improved – and good thing too, because the cheaper Pro model does have a decidedly plasticky, creaky feel to it and the cheap metal band surrounding the tablet frame fails to hide the fact. Well, you get what you pay for; the S model is almost 200 euros more expensive.
It is such a shame how Samsung continues to degrade the apparent feel of performance of their products by adding their own UI tweaks and features though.. and there is no Cyanogenmod build for the Exynos SOCs that are used in the Galaxy Tab S and my WiFi Pro model, as of yet anyway. Doing such large changes on their own also makes it harder to keep up with Google’s latest Android releases, so I wonder how long will it take them to upgrade to the Android “L” release. 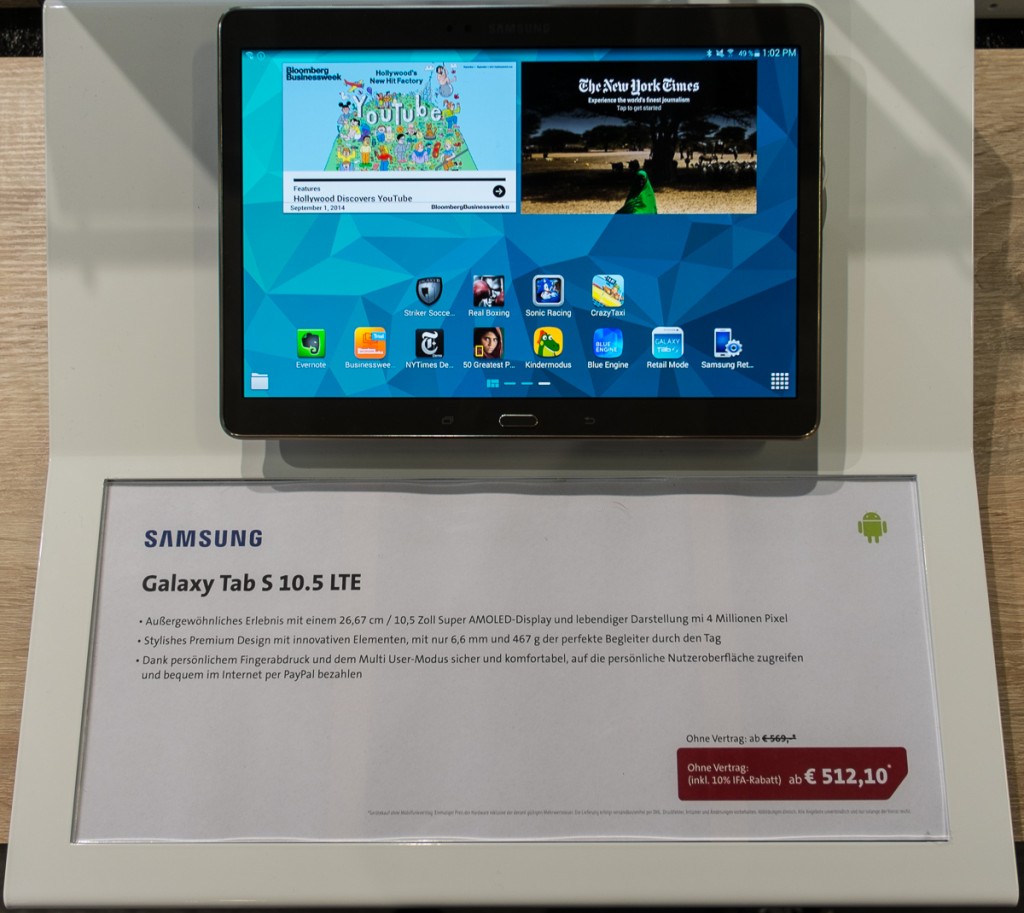 This felt like a Samsung Galaxy Tab Pro 8.4 but with a far better build quality. It had a firm metallic feel, no creaky plastickyness. It also felt incredibly thin and it was easy to hold in hand. Apparent performance was snappier than in any of the Samsungs – maybe because Sony didn’t add so many poorly optimized UI tweaks as Samsung did. I’d get this if I didn’t think 10″ is my optimal screen size (having moved up from 7″.) 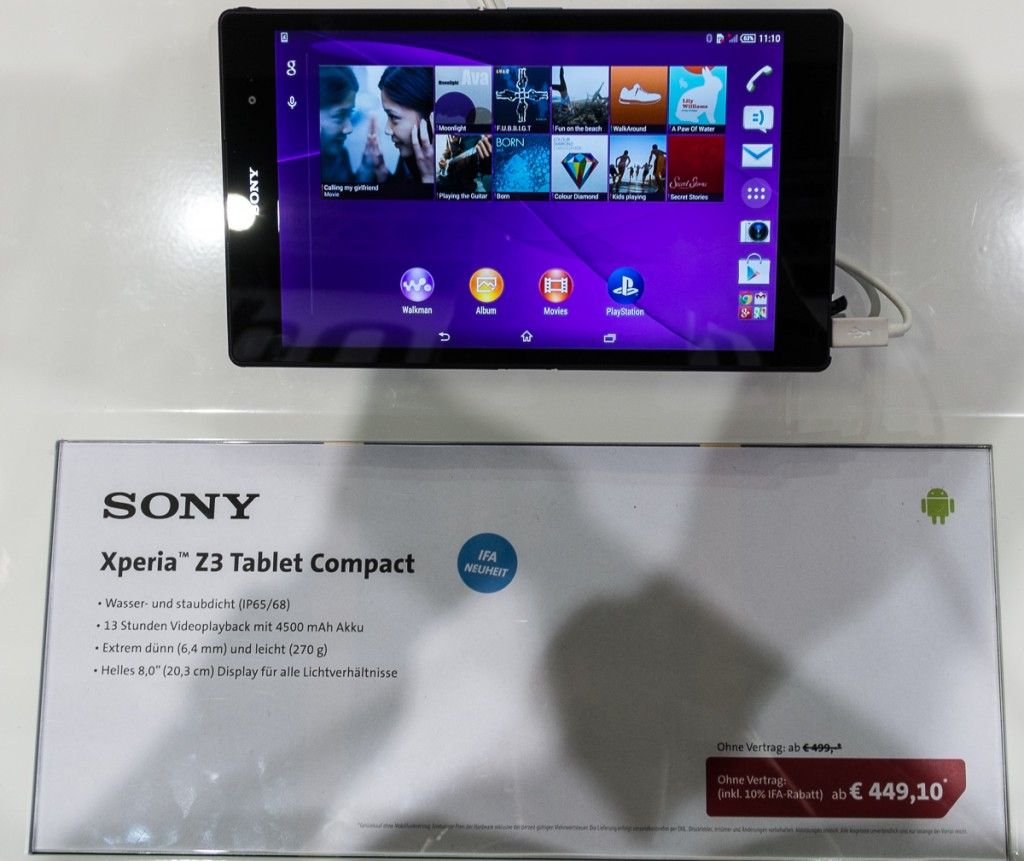 Not exactly a new phone anymore either, having been announced in Spring of this year, this was the first time I got to try one anyway. Well, it’s a clear logical improvement from last year’s Lumia 920. Apparent performance has improved a lot, especially in apps like Here Maps where panning and zooming around in satellite view was really snappy.
They were handing out Nokia lanyards at the Microsoft phone exhibition in the Deutsche Telekom area, which could well be the last IFA where they will be doing this. 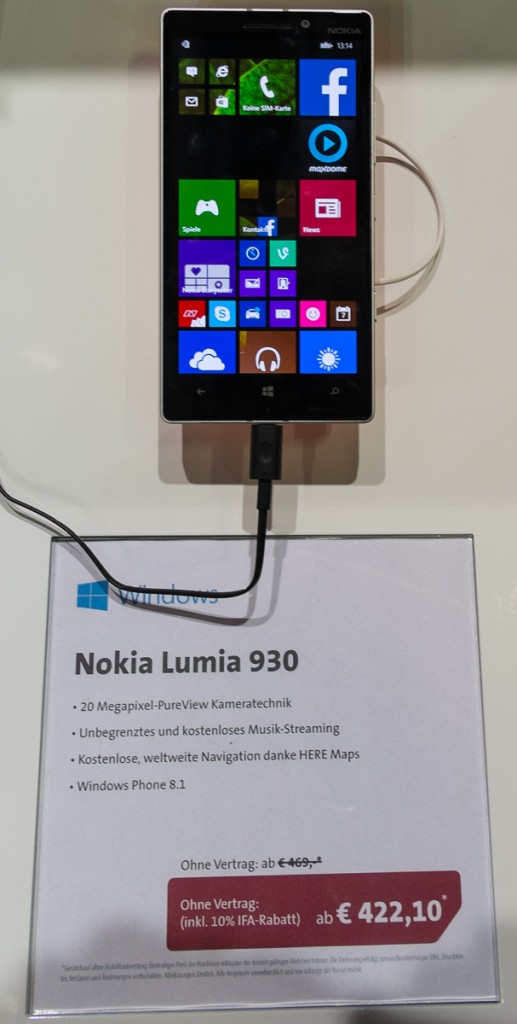 I spoke to two Microsoft employees and asked about a follow-up model to the record-breaking Lumia 1020 supercamera phone. They of course couldn’t tell me about unannounced products but went on to hint that I should wait 2 weeks and see what happens; and that “I would definitely buy it” without saying anything about the “it”…

I wonder if I would though. Upgrading Windows Phones isn’t as easy as it could be. Backup/Restore is not so great, at least if you’re used to the reliability possible on desktop operating systems. While the OS does back some things up and you can restore these things onto a newer device, not everything gets backed up. Any app that does not save it’s data in the cloud basically loses it’s data when you factory-reset your phone or upgrade to a newer model. With apps I mean games, actually.. I would hate to lose my level 24 character in Angry Birds Epic for example.

The Panasonic exhibition had a gorgeous red Tesla Motors car. The car drew a lot of attention and it was nearly impossible to get a good picture of it, as the car was really crowded. The exciting thing was when they popped the car hood open to show what’s inside… turns out that nothing – it’s actually a storage compartment! As they use Panasonic-made batteries, I guess that’s why it was in the Panasonic exhibition. 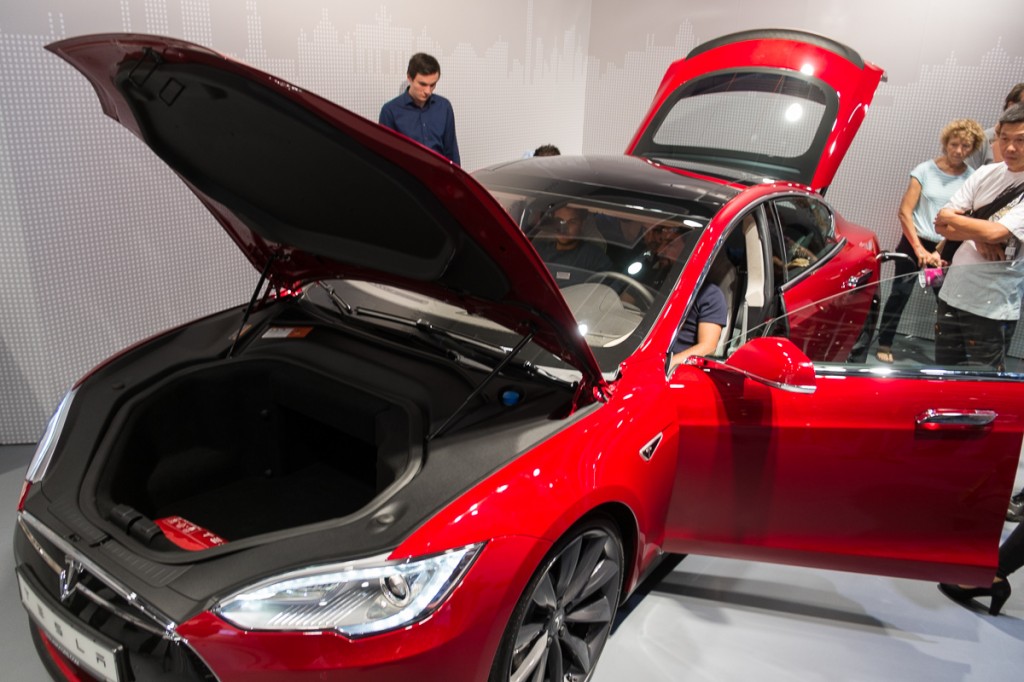 Several groups had an Oculus Rift on display. It was too hard to get to try any of these, as all of them had really long queues. Too bad, but it’s great to see the technology has a lot of appeal even though their marketing is so far very minimal – after all, it’snot a finished product yet. They are teasing at a consumer version right now though. 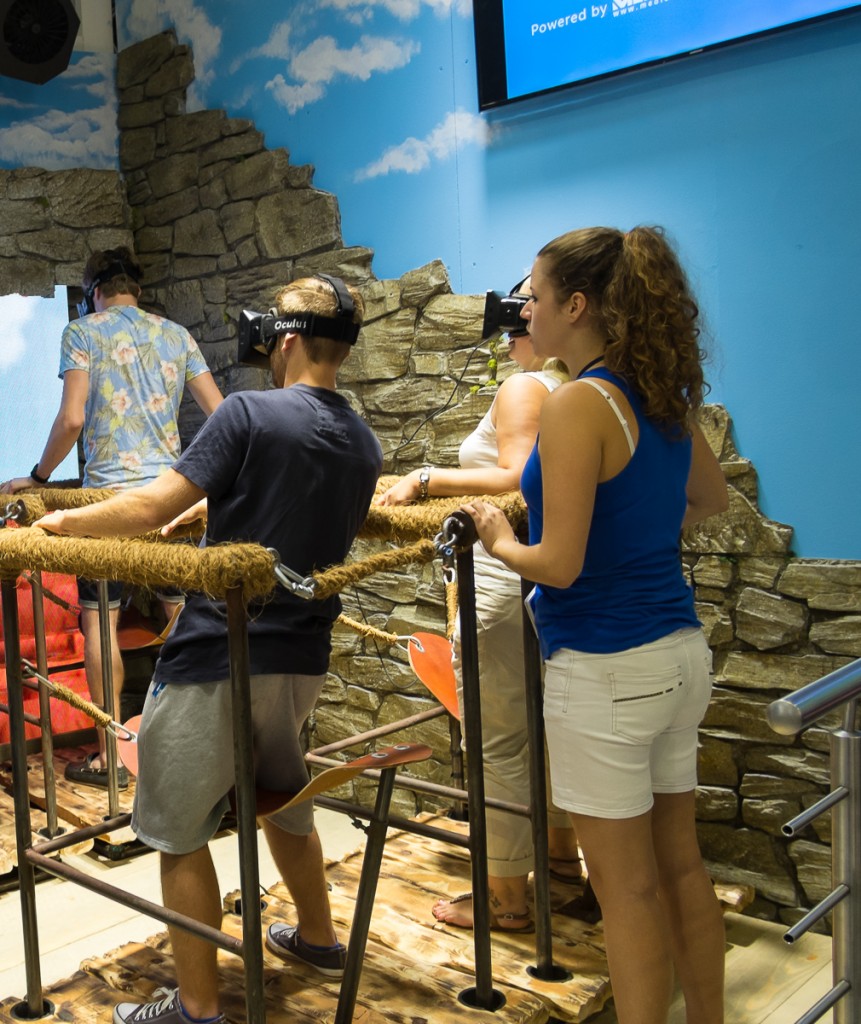 I was a heavy user of the Garmin Forerunner 205 years ago. But the device was kind of outdated in the size, software and user interface section and the company was dragging their feet updating the product. Eventually it broke down and Garmin had no decent replacement model, so I jumped into the more limited “Nike+ powered by TomTom” device (what a name!). This year at Garmin’s stand, I saw they’ve expanded their product lines a lot, with a multitude of health, fitness and navigation products being offered. This Forerunner 220 looks like the replacement I was waiting for and with a quick try, it seemed a lot more intuitive. I hope it doesn’t still come with that outdated PC software though… 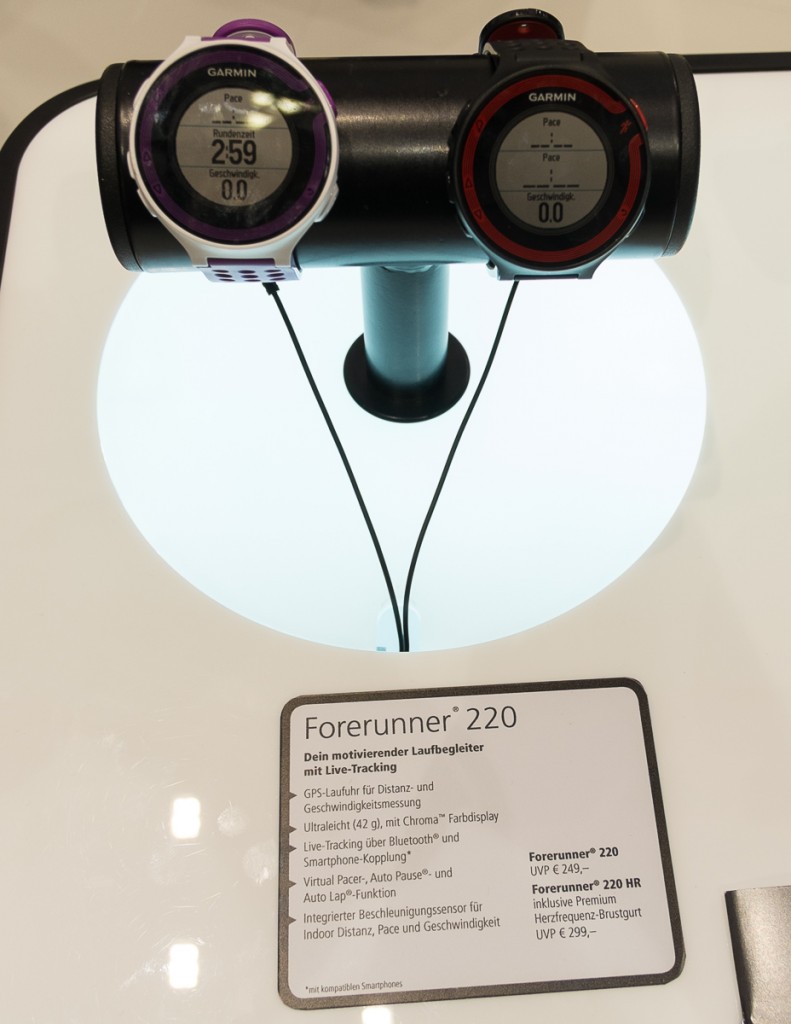